“May I never boast except in the cross of our Lord Jesus Christ, through which the world has been crucified to me, and I to the world.” - Galatians 6:14 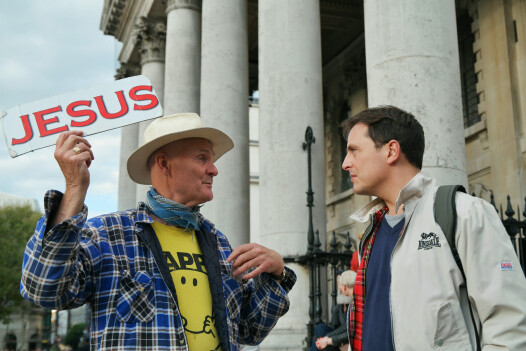 According to the magnificent and vivid account in Hebrews 11, saving faith has an otherworldly perspective in which the lures and temptations of this world lose their power because of the far greater power and attractions of the eternal city to which we are headed. Abraham was enabled to leave his country and go to a strange land because he was “looking forward to the city with foundations whose architect and builder is God” (Heb. 11:10). Moses was able to turn his back on the temporary pleasures of sin in the luxurious courts of Egypt because he was looking to a permanent reward in eternity (Heb. 11:24-26). Some unnamed heroes, “men of whom the world was not worthy” (Heb. 11:38), wandered in deserts and mountains and in caves and holes in the ground. They were filled with enough faith to see the fleeting nature of the allurements of this evil age, and to turn their backs on them forever in service to God.

But what if your faith is not so strong? What if the temptations of worldly pleasure consistently seem to have their way with you, despite the fact that you believe in Jesus Christ and grieve over your sins? To what can you turn to weaken the power of this world on your heart? The Apostle Paul tells us plainly in Galatians 6:14 that the cross of our Lord Jesus Christ has the power to break the hold of the world on a truly believing heart. Through the cross, says Paul, “the world has been crucified to me, and I to the world.” What does this balanced expression mean? Perhaps a good rephrasing is “through the cross, the world is dead to me…utterly repugnant, foolish, rejected, without power and vile; and because of the cross, that’s exactly the way I also seem to the world!” Because of the cross of Jesus Christ, Paul has seen through the outer trappings of the world’s appearance to reject it forever. The world is useless to me, says Paul. What is more, because of my association with my crucified Lord, the world has forever rejected me. It offers me no more honors, no more accolades, no more allurements…the world and I are separated forever: I have rejected the world and the world has rejected me.

Paul uses this same kind of language in 1 Corinthians 4:13, when he says that the apostles have become “the scum of the earth, the refuse of the world.” It seems that the Corinthians were looking at their Christian lives as triumphant processions in which the world would shower them with praise and blessing. Instead, the world had utterly rejected both the apostles and their message because of one simple thing: the ugliness of the cross of Christ. Yet the world itself (that is, the sinful world system in rebellion to God) has been rejected by God, and so Christians must die to it forever. In the cross of Christ, we do just that.

"Perhaps a good rephrasing is 'through the cross, the world is dead to me…utterly repugnant, foolish, rejected, without power and vile; and because of the cross, that’s exactly the way I also seem to the world!'"

As we meditate on what Christ did for us at Calvary, and on how empty are the blessings and allurements of the world, we die more and more to this present age. John Bunyan clearly laid this out in The Pilgrim’s Progress. When Christian was asked by someone how he defeated his temptations, he replied: “When I think what I saw at the cross, that will do it. When I look at my broidered coat (i.e. holiness in Christ), that will do it; also when I look into the roll I carry in my bosom (i.e. the Scriptures which give assurance of salvation) that will do it; and when my thoughts wax warm about where I am going (i.e. heaven), that will do it.” Brothers and sisters, gaze much at the cross of Christ, through which the world has been crucified to you, and you to the world. It has otherworldly power to bring you through this world.